Guys, are you ready to see the ugliest OSB stairs ever? This ugly duckling was no more than a sad, sad through way from the main floor to the basement in our previous home. The basement was unfinished, but had potential as a separate suite. I’ll come back to this house and the complete remodel we did here, but for now, just know that this particularly odd stairwell was closed off at both the top and bottom. As we neared completion on the remodel I told my husband “Well, we have to do something with this thing. We can’t have people trembling in fear as they walk down to the basement!”

So one day I started ripping the dirty, stained industrial carpet up. And underneath I found gleaming old-world hardwood floors.

This house was built in 2004 (you remodeled a house built in 2004?! More on that later.) The cheapest, most enduring material was OSB, and we got exactly what we expected.

So let’s talk about this. Maybe you, like me, have admired the many stair remodels online. Stained carpet gives way to beautiful hardwoods that look like a million bucks. But under your old worn out carpet lies a beast of a whole different nature.

Oriented Strand Board, or OSB is a composite board made up of a bunch of adhesives and wood flakes. It’s like particle board, only…flaky. It’s strong, resilient, and not in the least bit aesthetically pleasing. Honestly, the best solution for us was carpet. But here’s the thing: We were flat out broke, out of money, empty account, done. And the floors at the top and bottom of the stairs were wood. So there was that.

What do you do when you are out of easy options? You get creative!

We began by painstakingly removing the old carpet. Cat pee, folks. It reeked of cat pee. And for all the world, it didn’t want to go anywhere. It fought us tooth and nail. Because, as you can see from this photo, it was adhered with a gelatinous layer of adhesive. Thick, tar-like yellow stuff that revealed itself like some sort of horrid swamp beast telling us to turn around and go back. 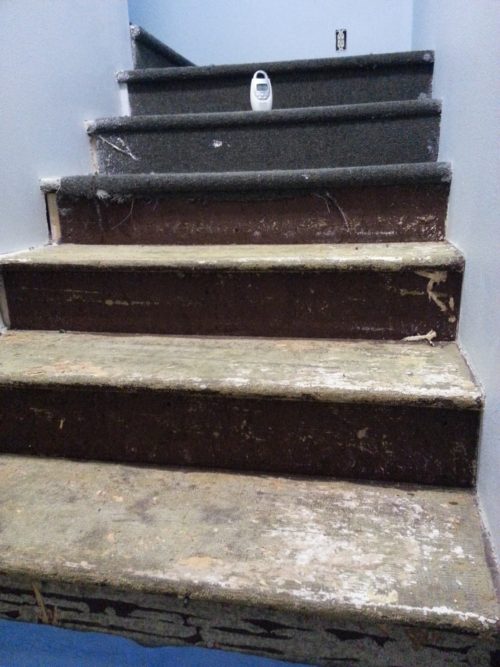 But that’s the thing about renovations, once you dig in you are sort of committed, aren’t you? So hours worth of work and a several blisters later, we got that carpet out. And then we started sanding those ugly OSB stairs with their layers of awful adhesive. With the belt sander. With heavy, heavy grit sand paper. After a few hours I mentally calculated how long I would have to sand to remove all the adhesive and figured I would be 89 years old by the time it was done. As we were planning to put the house on the market in the next couple months, that wasn’t going to work.

Then my husband had a brilliant idea. (He has a lot of them.) He removed each stair tread and flipped it over, then nailed it back down. As good as new! 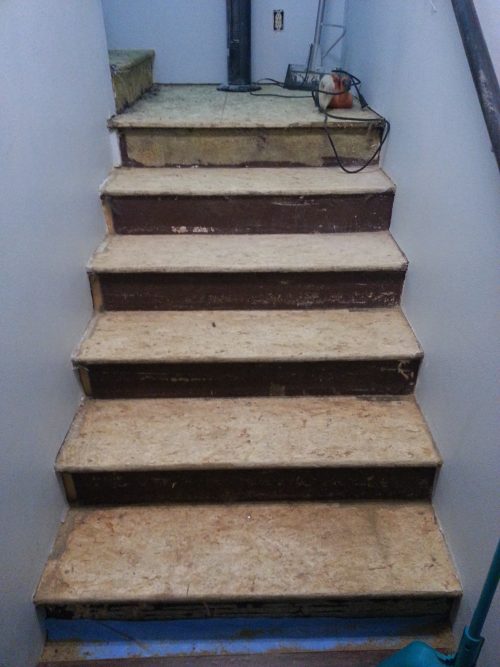 What’s that they say about brilliance being so many parts craziness or courage or something? I stood there one day, staring at those stairs while my kids napped and my husband was at work, and my gaze landed on the tubs of drywall mud that we had used to complete the basement walls. Mud the stairs?! Could one even do such a thing?! But I figured there was no one around to tell me how stupid that idea was, so I grabbed a trowel and skim coated the first stair. Just enough to fill in the OSB and make a smooth surface.

Would you believe it? It looked pretty darn good! But I still didn’t know how it would turn out. When Eric returned home from work I showed him my crazy idea, expecting that he would suggest this was not near strong enough for foot traffic. But he was actually quite impressed – which probably had something to do with the fact that it wasn’t costing us anything extra. We skim coated every stair, then sanded it smooth. After that we used Kilz primer to coat each tread, which in effect sealed the mud and prepped it for painting. For the face of the stairs we cut 1/4 inch smooth plywood (I think it was birch) and cut each piece to fit exactly. There was no skirting on the stairs, so we had to work with each stair individually to fit it tight to the wall. The facings were painted white before installation, using some leftover enamel from another project. The treads we painted Van Dyke brown by Sherwin-Williams. We used their Porch and Floor enamel for this project, which dries to a good, hard surface great for foot traffic. We used caulking around the edges to seal any gaps, and that was it! The entire coast was under $100 for the Kilz, enamel paint, and plywood. We don’t expect to see this stairwell in a magazine anytime, well, ever. But for what it was the improvement was huge. Most visitors to this home will likely never see the stairs, but if they do it won’t be a terribly awkward moment anymore.

Would we do it again? It depends. For stairs that are more front and center we would hold out for wood and cover them up. But if that’s not an option for whatever reason then this is a solid back up plan. Think you have a stairwell that is even uglier than these terrible osb stairs?! I would love to see them! Also, feel free to share what you think of how these turned out!